How Unsteady Is Your Retirement Strategy? 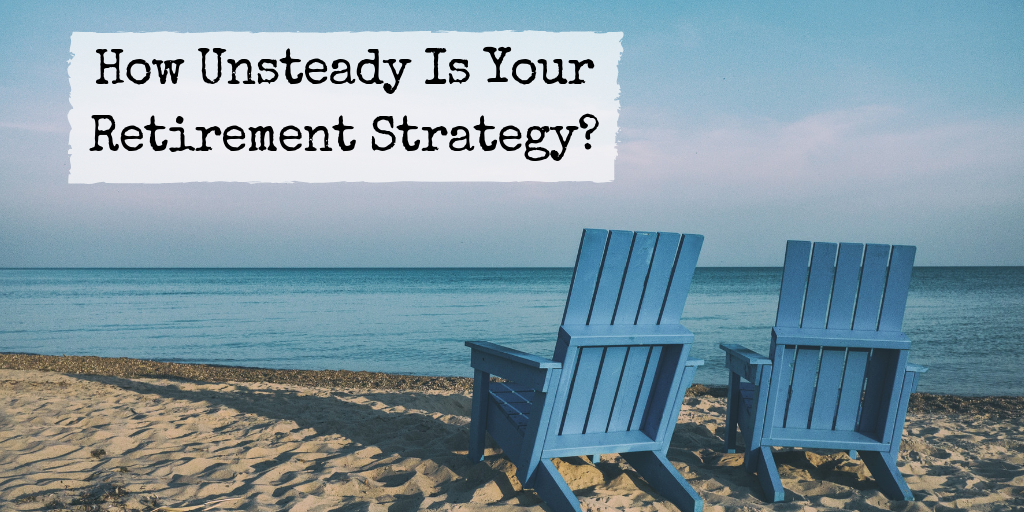 The government’s General Accounting Office (GAO) reports that 48% of people aged 55 and approaching retirement have nothing in retirement savings. That statistic is not quite right, but the reality isn’t too much better.

The GAO counts those who have nothing in an IRA or 401(k) plan as having saved nothing for retirement. But what they don’t know – or know and don’t take into account – is that retirees may have sources of income outside of their retirement plan savings.

Having a traditional pension that pays you a guaranteed income for life is the equivalent of hundreds of thousands in retirement savings. It’s one of the major benefits that public sector employees enjoy. Many corporations have eliminated pensions and offer 401(k) type plans called “defined contribution” plans. However, some businesses still do offer these.

That leaves about 29% of Americans without pensions or savings, but that’s not the complete story. People who have saved or invested in investment accounts that are not classified as “retirement accounts” are included in that 29%. Your home is an investment and many older Americans own their own homes. Unfortunately, a lot of older homeowners still have mortgages and carry credit card debt.

So that 48% number is not as bad as it seems. But it is a fact that too many older Americans are increasingly reliant on Social Security for retirement income. That’s a problem.

The bottom line for those over 55 and hoping to retire one day is to think ahead. Do some planning and don’t assume that retirement is going to take care of itself. Your retirement savings are your insurance policy against having to reduce your lifestyle after your paycheck stops.

Take the time to get a comprehensive retirement plan. The benefit of a plan is that it tells you, in actual numbers, how much money you will need to retire and how much you will be able to spend during retirement. Find an advisor – an experienced Certified Financial Planner™ professional – who will guide you. Do it now before time slips away.

Korving & Company is an investment management, financial advisor, and financial planning firm that specializes in working with retirees, couples who are serious about retirement planning, and women who have recently suffered the loss of a spouse.